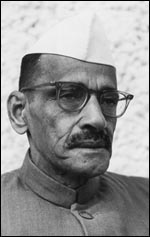 Born on July 4, 1898, in Sialkot (Punjab), Shri Gulzarilal Nanda was educated at Lahore, Agra and Allahabad. He worked as a research scholar on labour problems at the University of Allahabad (1920-1921) and became Professor of Economics at the National College (Bombay) in 1921. He joined the Non-Cooperation Movement the same year. In 1922, he become Secretary of the Ahmedabad Textile Labour Association in which he worked until 1946. He was imprisoned for Satyagraha in 1932, and again from 1942 to 44.

Shri Nanda was elected to the Bombay Legislative Assembly in 1937 and was Parliamentary Secretary (Labour and Excise) to the Government of Bombay from 1937 to 1939. Later, as Labour Minister of the Bombay Government (1946-50), he successfully piloted the Labour Disputes Bill in the State Assembly. He served as Trustee, Kasturba Memorial Trust; Secretary, Hindustan Mazdoor Sevak Sangh; and Chairman, Bombay Housing Board. He was also a Member of the National Planning Committee. He was largely instrumental in organising the Indian National Trade Union Congress and later became its President.

In 1947, he went to Geneva as a Government delegate to the International Labour Conference. He worked on the ‘The Freedom of Association Committee’ appointed by the Conference and visited Sweden, France, Switzerland, Belgium and England to study labour and housing conditions in those countries.

In March 1950, he joined the Planning Commission as its Vice-Chairman. In September the following year, he was appointed Planning Minister in the Union Government. In addition, he was also given charge of the portfolios of Irrigation and Power. He was elected to the House of the People from Bombay in the general elections of 1952 and was re-appointed Minister for Planning Irrigation and Power. He led the Indian Delegation to the Plan Consultative Committee held at Singapore in 1955, and the International Labour Conference held at Geneva in 1959.

Shri Nanda was elected to the Lok Sabha in the 1957 general elections, and was appointed Union Minister for Labour and Employment and Planning and, later, as Deputy Chairman of the Planning Commission. He visited the Federal Republic of Germany Yugoslavia and Austria in 1959.

He was re-elected to the Lok Sabha in the 1962 general elections from Sabarkantha Constituency in Gujarat. He initiated the Congress Forum for Socialist Action in 1962. He was Union Minister for Labour and Employment in 1962 and 1963 and Minister for Home Affairs from 1963 to 1966.