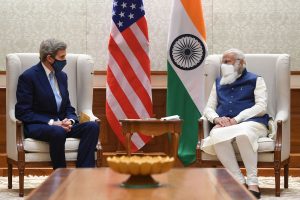 Prime Minister noted that India is committed to meeting its nationally determined contributions under the Paris Agreement and that it was among the few countries on track to meet these commitments. Mr. Kerry noted that the United States would support India’s climate plans by facilitating affordable access to green technologies and requisite finance. Prime Minister agreed that cooperation between India and the United States particularly on financing innovation and faster deployment of green technologies would have a positive demonstration effect on other countries.

Had an excellent discussion with US Special Presidential Envoy for Climate @JohnKerry. His passion and commitment to expedite climate action are commendable. pic.twitter.com/HzCbigUfKt

With our complementary strengths, India and US can creatively collaborate on a 2030 agenda for clean and green technologies in the service of the planet. @JohnKerry