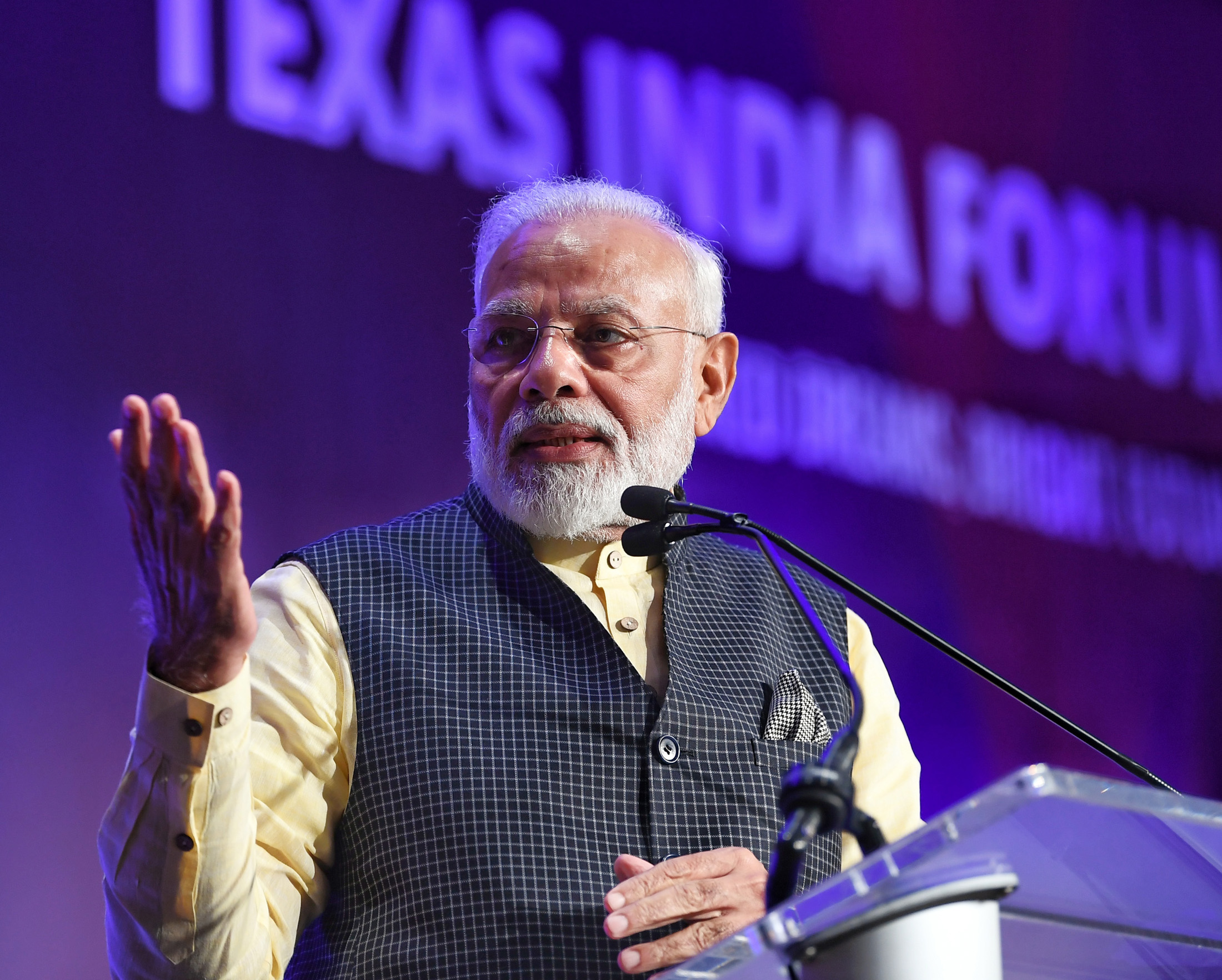 Addressing the massive gathering, Prime Minister said that new history and new chemistry are being made at the venue in Houston. “The presence of Donald Trump and the senators talking about India’s progress is a respect to the achievement of the 1.3 billion Indians”, Prime Minister said. He added that the energy at the stadium shows the increasing synergy between India and United States.

“The name of this event is Howdy Modi. But Modi alone is nothing. I am a person working for the wishes of 130 crore people in India. So when you ask – Howdy Modi, I would say all is well in India.”, Prime Minister said. Saying “Everything is fine” in multiple Indian languages,Prime Minister said that thisunity in diversity is the strength of our vibrant democracy.

“Today, India is determined and working hard towards creating a New India”, PM said. He said that lots of efforts are being provided to build a new and better India. “India is not putting off challenges, we are taking them head on. India is not going for incremental changes, we areworking on creating permanent solutions, and makingimpossible possible”, PM said

Highlighting the achievements of NDA government in the past five years, Prime Minister said, “In the last five years, 130 crore Indians have achieved things which on one could have even imagined. We are aiming high, we are achieving higher,”. He mentioned about the transformational action done by his government in providing gas connections to households, improving rural sanitation, creating rural road infrastructure, opening of bank accounts etc.

Prime Minister reiterated the commitment of his government towards ‘Ease of Living’ and ‘Ease of Business’. He outlined the various initiatives undertaken by the government for ensuring ‘Ease of Living’, including removal of obsolete laws, ensuring faster delivery of service, cheap data rate, strong action against corruption, rolling out of GST etc. He said that under his government development will reach each and every Indian.

Speaking about the abrogation of Article 370, PM asked the gathering to give standing ovation to the parliamentarians for taking such a decisive strong action. He said that Article 370 had kept people of Jammu and Kashmir &Ladakh away from development and progress. “Now people of Jammu &Kashmir and Ladakh have the same rights as every Indian.”, PM said.

Prime Minister extended an invite for President Trump and his family to visit India. “Our friendship will give new heights to the vibrant future of India and the United States.”, Prime Minister said.

Terming it as a honour and privilege to welcome Donald J Trump to the Howdy Modi event, Prime Minister that the U.S President has left a deep and lasting impact everywhere. He hailed the leadership qualities of the President of United States. He said that every time they met, he felt the friendliness, warmth and energy of Donald J Trump.

Addressing the event, Donald J Trump said that Prime Minister Narendra Modi is doing an exceptional job for India and its citizens. He congratulated the Prime Minister for his unprecedented election victory. Headded that the relationship between India and United states are better than ever.

Hailing Primes Minister’s pro-growth policies, Trump said “India has lifted nearly three hundred million people out of poverty under Prime Minister Narendra Modi’s leadership. That is incredible”.He said that under Prime Minister Narendra Modi’s leadership, the world is witnessing a strong, thriving Republic of India.President thanked the Indian community for their contributions and said that his administration is committed towards the betterment of the community.

Welcoming Prime Minister to Houston, House Majority leader StenyHoner said that United States is inspired by modern India. He said that Prime Minister Modi leads the nation while being mindful of the challenges, undeterred as India reaches into a new frontier of space and equally determined to lift millions out of poverty back on earth.

You all have set the stage for a glorious future as far as India-USA ties are concerned. I thank you all: PM @narendramodi tells the Indian community in Houston pic.twitter.com/megDbMAiHp

Many measures for welfare and many noteworthy farewells... pic.twitter.com/NDEwnL7eKs

An important farewell from the previous few weeks, one that set the stage for a better quality of life for the people of Jammu and Kashmir. pic.twitter.com/1BV3QECGb0

Dear @POTUS @realDonaldTrump, your presence at #HowdyModi in Houston was a watershed moment in India-USA ties.

Moments from Houston that will always remain a part of my memory.

I thank all those who came for the #HowdyModi programme.

The event was lively, showcasing the special features of Indian culture and accomplishments of the Indian diaspora. pic.twitter.com/2L4AhkVTSz

You all have set the stage for a glorious future as far as India-USA ties are concerned. I thank you all: PM @narendramodi tells the Indian community in Houston pic.twitter.com/megDbMAiHp

The Eternal Gandhi museum will be a prized cultural landmark in Houston. I have been associated with this effort for a while. It will surely make Gandhi Ji’s thoughts popular among the youth: PM @narendramodi in Houston pic.twitter.com/FsrU8vzVIs

PM @narendramodi has a request for the Indian diaspora. Know what it is... pic.twitter.com/RTPYLwjDaH