PM interacts with CMs to plan ahead for tackling COVID-19 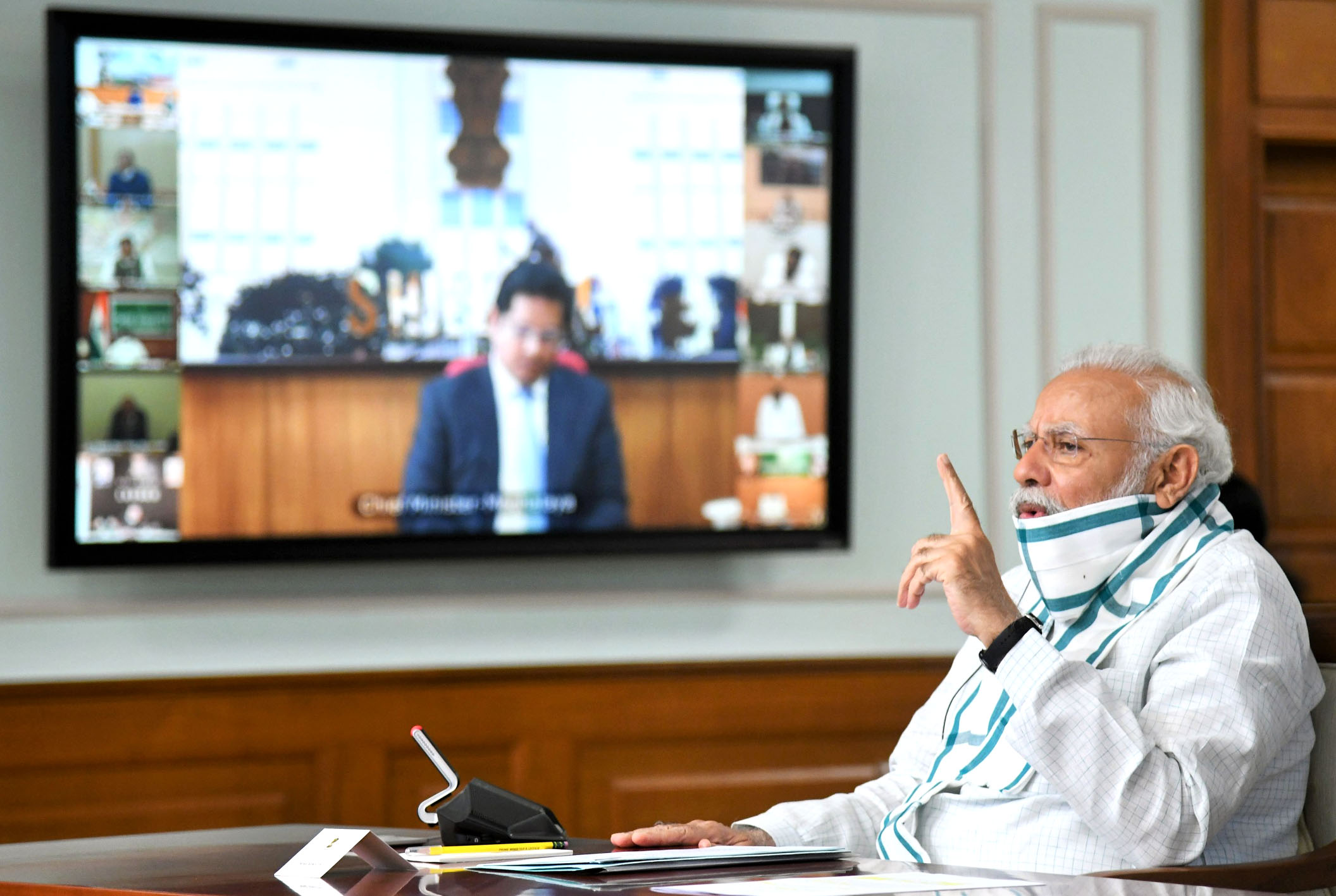 Lockdown has yielded positive results, country has managed to save thousands of lives in the past 1.5 months: PM

Our aim must be rapid response, need to follow mantra of ‘do gaz doori’: PM

We have to be brave and bring in reforms that touch the lives of common citizens: PM

We have to give importance to the economy as well as continue the fight against COVID-19: PM

Impact of coronavirus will remain visible in the coming months, masks and face covers will be part of our life: PM

Prime Minister Shri Narendra Modi today interacted with Chief Ministers of states via video conferencing to discuss the emerging situation and plan ahead for tackling the COVID-19 pandemic. This was the fourth such interaction of the Prime Minister with the Chief Ministers, the earlier ones had been held on 20th March, 2nd April and 11th April, 2020.

Prime Minister underlined that the Lockdown has yielded positive results as the country has managed to save thousands of lives in the past one and a half months. He added that India’s population is comparable to that of the combined population of several countries. The situation in many countries, including India, was almost similar at the start of March. However, due to timely measures, India has been able to protect many people. He however forewarned that the danger of the virus is far from over and constant vigilance is of paramount importance.

Prime Minister said that the country has seen two Lockdowns till now, both different in certain aspects, and now we have to think of the way ahead. He said that as per experts, the impact of coronavirus will remain visible in the coming months. Reiterating the mantra of ‘do gaz doori’, he said that masks and face covers will become part of our lives in the days ahead. He added that under the circumstances, everyone’s aim must be rapid response. He pointed out that many people are self-declaring whether they have cough and cold or symptoms, and that this is a welcome sign.

Prime Minister said that we have to give importance to the economy as well as continue the fight against COVID -19. He emphasized on the importance of usage of technology as much as possible and also to utilize time to embrace reform measures. He emphasized on the significance of ensuring that more people download the AarogyaSetu app to bolster the efforts of the country in the battle against COVID-19.  He said “we have to be brave and bring in reforms that touch the lives of common citizens.” He also suggested that people associated with Universities can be integrated on devising ways to fight the pandemic and strengthen research as well as innovation.

He highlighted the importance for states to enforce guidelines strictly  in the hotspots i.e. the red zone areas. He stated that the efforts of the states should be directed towards converting the red zones into orange and thereafter to green zones.

On the issue of getting back Indians who are overseas, he said that this has to be done keeping in mind the fact that they don’t get inconvenienced and their families are not under any risk. Prime Minister also urged Chief Ministers to factor in the changes in weather – advent of summer and monsoon – and the illnesses that can potentially come in this season, while strategizing ahead.

Union Home Minister reaffirmed the need to enforce lockdown so that maximum lives are saved.

The Chief Ministers praised the leadership of the Prime Minister during this period of crisis, and also highlighted the efforts undertaken by them in containing the virus. They spoke about the need to keep a close vigil on international borders, and also on addressing the economic challenge and ways to further boost health infrastructure. The leaders expressed gratitude towards the police force and medical staff for the exemplary work done by them in the fight against COVID-19.

Today was the 4th interaction with CMs. We continued discussions on COVID-19 containing strategy as well as aspects relating to increased usage of technology, reforms and more. https://t.co/xB7pnjmh2P