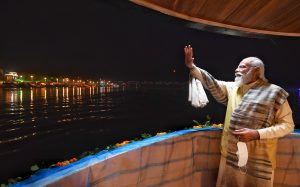 Congratulates Kashi for getting back stolen Statue of Mata Annapurna

Addressing the event, the Prime Minister said it was another special occasion for Kashi as, He said, the idol of Mata Annapurna that was stolen from Kashi more than 100 years ago, is now coming back again. It is a matter of great fortune for Kashi. He said these ancient idols of our gods and goddesses are a symbol of our faith as well as our priceless heritage.

The Prime Minister said if such effort had been made earlier, the country would have got back many such statues. He said for us legacy means the country’s heritage, while for some, it means their family and their family name. He added for us heritage means our culture, our faith, our values! For others it might mean, their idols and family photos.

The Prime Minister named Guru Nanak Dev ji himself as the biggest symbol of reforms in the society and system. He said whenever there are changes in the society and the national interest, the voices of uncalled for opposition arise somehow. But when the significance of those reforms becomes clear, everything gets alright. He cited this as the lesson we get from the life of Guru Nanak Devji.

The Prime Minister said when development works started for Kashi, the protesters protested for the sake of it. He said when Kashi had decided that Vishwanath Corridor would be built till Baba’s Darbar, the protesters had criticized that too, but today the glory of Kashi is being revived by the grace of Baba. He said centuries-long direct connection between Baba’s Darbar and Maa Ganga is being re-established.

The Prime Minister expressed happiness that by the grace of the Lord Kashi Vishwanath, he got the opportunity to participate in the festival of light at Kashi. He recounted the glory of the ancient city and said that Kashi has guided the world over the ages. The Prime Minister said that due to the Corona restrictions he could not come to the city, which is also his constituency, very frequently and keenly felt the void created by this. He said he was never distant from his people during this time and kept tab on the arrangements during the pandemic times. He praised the spirit of public service displayed by the people of Kashi during the pandemic.