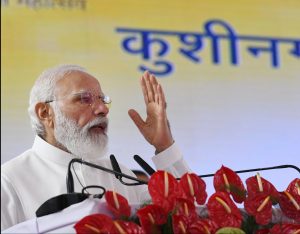 India is the center of devotion, faith and inspiration to Buddhist society around the world. Today, the inauguration of Kushinagar International Airport is in a way a tribute to their devotion. This region, which is witness to the entire journey from the enlightenment of Lord Buddha to Mahaparinirvana, is getting directly connected to the world today. The landing of a Sri Lankan Airlines flight at Kushinagar is like a tribute to this holy land. Kushinagar welcomes with great pride the revered delegation and other dignitaries who have come from Sri Lanka by this flight today.There is also a happy coincidence that today is the birth anniversary of Maharshi Valmiki. With the inspiration of Lord Maharshi Valmiki ji, the country is marching on the path of Sabka Vikas with the help of SabkaSath and SabkaPrayas.

This International Airport of Kushinagar is the result of decades of hopes and expectations. My happiness is two-fold today. There is a sense of mental satisfaction as an inquisitor of the spiritual journey and it is also an occasion of the achievement of a commitmentas a representative of the Purvanchal region. Many congratulations to the people of Kushinagar, UP, Purvanchal- eastern part of India and to the followers of Lord Buddha across the world for the Kushinagar International Airport.

India is paying special attention to develop the places associated with Lord Buddha through better connectivity and the creation of facilities for the devotees. The development of Kushinagar is one of the key priorities of the UP government and the central government. Lumbini, the birth place of Lord Buddha, is not far from here. Jyotiraditya ji has described it in detail now, but still I want to repeat it so that we can easily understand how this region is the center point of the country. Kapilvastu is also nearby. Sarnath, where Lord Buddha gave the first sermon, is also within a radius of 100-250 kilometers. Bodh Gaya, where Buddha attained enlightenment, is also a few hours away. Therefore, this region is going to become a great center of faith and attraction not only for the Buddhist followers of India but also for the citizens of many countries like Sri Lanka, Thailand, Singapore, Laos, Cambodia, Japan, Korea, etc.

Kushinagar International Airport will not only become a medium of air connectivity, but will directly benefit the farmers, cattle ranchers, shopkeepers, workers and entrepreneurs here. A complete ecosystem of business and trading will develop here. Tourism, taxi drivers, small businessmen in hotels and restaurants will reap the maximum benefits. This will also create many new employment opportunities for the youth of this region.

Modern infrastructure is very important for tourism in all its forms, whether for faith or for leisure.Infrastructure is its pre-condition. Modern infrastructure complete with rail, road, airways, waterways, hotels, hospitals, internet connectivity, hygiene, sewage treatment and renewable energy ensuring a clean environment are interconnected and it is important to work on all these simultaneously. Today’s 21st century India is moving ahead with this approach only.Now a new aspect has also been added to tourism and that is India’s rapid progress of vaccination.It will create confidence in the foreign tourists that India is widely vaccinated and it is safe to go to India as a tourist or for any work. It can also be reassuring for them. In the past few years, the emphasis has been laid on bringing air connectivity to those regions and people who had never even thought of it.

The UDAN scheme started with this objective is nearing four years of its completion. Under the UDAN scheme, more than 900 new routes have been approved in the last few years, out of which air service has started on more than 350 routes. More than 50 new airports or those previously not in service have been made operational. Plans are afoot to create a network of more than 200 airports, heliports and seaplanes in the country in the next three-four years. You and I are witness to the fact that now the common man of India is becoming more visible at the airports following the increase in these facilities.More and more people from the middle class are now taking advantage of the air service.Under the UDAN scheme, air connectivity is constantly improving in Uttar Pradesh. Flights have started from eight airports in UP. After Lucknow, Varanasi and Kushinagar, work is going on at a brisk pace at Jewar International Airport. Apart from that, airport projects are going on in Ayodhya, Aligarh, Azamgarh, Chitrakoot, Moradabad and Shravasti. In other words, air connectivity will be strengthened in different areas of UP very soon. I have also been informed that SpiceJet is starting direct flights between Delhi and Kushinagarin the next few weeks. Jyotiraditya ji has mentioned some more destinations and this is going to bring a lot of convenience to the domestic travelers and devotees.

Recently, the country has taken an important step related to Air India, so that the country’s aviation sector should run professionally and convenience and safety should be prioritized. This step will give new energy to the aviation sector of India. One such major reform is related to the opening up of the defence airspace for civil use. With this decision, the distance of air travel has reduced on many air routes and time has also been reduced. The process of setting up 8 new flying academies in 5 airports of the country has also been started for the youth of India to get better training here. The rules related to the use of airports for training have also been simplified.India’s recent drone policy is also going to bring life-changing transformation in the fields ranging from agriculture to health and from disaster management to defence. A complete ecosystem is now being developed in India from manufacturing drones to creating trained manpower. Recently, the PM GatiShakti National Master Plan has also been launched so that these projects and policies move rapidly and there should not be any kind of obstacle. It will not only improve governance, but also ensure that all modes of transport such as road, rail, air etc should support each other and increase each other’s capacity. It is the result of these unrelenting reforms that 1,000 new aircraft have been estimated to be added to the Indian civil aviation sector.

India’s aviation sector will become a symbol of nation’s progress in this virtuous period of independence and the energy of Uttar Pradesh will also be involved in it.With this wish, I congratulate all of you and the followers of Buddhism around the world for this international airport. From here I will go to seek blessings from Buddhist monks from the country and the world and then I will also get the privilege of inaugurating many more infrastructure projects of UP.

Many thanks once again!

Kushinagar airport will boost connectivity and tourism. Here is my speech. https://t.co/5pXUE3rQho

Come to Kushinagar, get inspired by the noble principles of Lord Buddha. pic.twitter.com/i1zajn5tNL

The airport in Kushinagar fulfils a long-standing dream of the people of this great land, which is closely associated with Lord Buddha.

Congratulations to the people of Kushinagar and surrounding areas. pic.twitter.com/thBlFYld88

We envision our aviation sector to run with utmost professionalism, where public convenience is given top priority. Guided by that, a number of reforms have been ushered, which have been widely appreciated. pic.twitter.com/RwrbMFBwDT