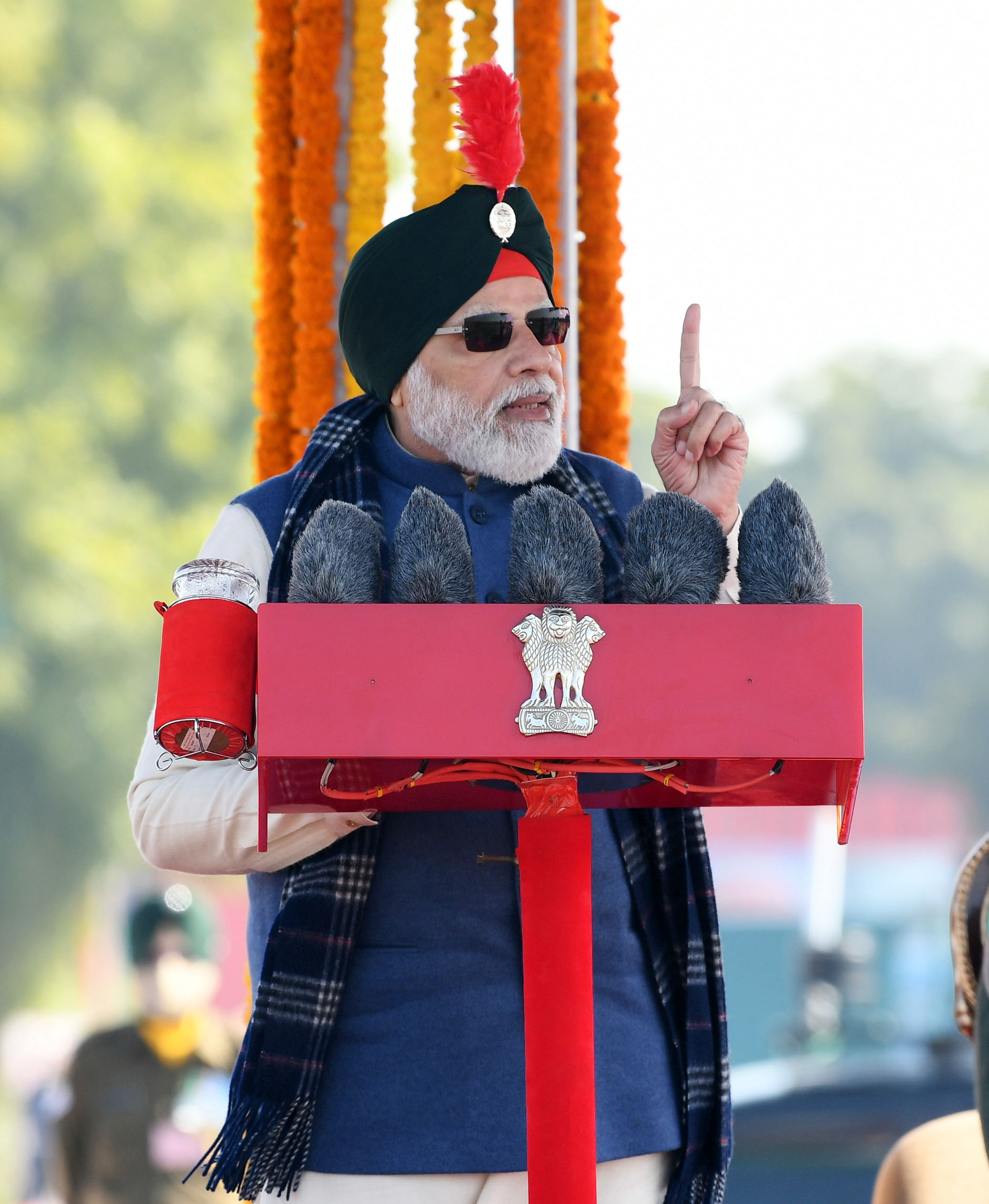 The nation is currently celebrating the Amrit Mahotsav of its independence. And when a young country becomes witness to such a historic occasion, there appears to be an altogether different enthusiasm in its celebration. I saw the same enthusiasm at Cariappa Ground as well. This is the insight of that youth power of India who will fulfill our resolutions and build a grand India of 2047 when the country completes 100 years of independence in 2047.

I am proud that I too have been an active cadet of NCC like you. But I was not privileged like you. I derive immense strength from the upbringing and training in NCC in discharging my responsibilities towards the country. Recently, I also got the NCC alumni (membership) card. Therefore, along with the Prime Minister of the country, I am also associated with you in this manner also. I salute all the office bearers and fellow cadets of NCC on this occasion. I extend my warm wishes to the cadets who were awarded today. Today is also the birth anniversary of the great freedom fighter, Punjab Kesari Lala Lajpat Rai ji. Today is also the birth anniversary of Field Marshal Cariappa. I respectfully bow to these brave sons of the country who played an important role in nation-building.

Today, when the nation is marching ahead with new resolutions, our efforts are also underway to strengthen the NCC. A high-level review committee has been set up in this regard. We have made one lakh new cadets in the border areas of the country in the last two years. I am happy with the increased use of modern technology like simulation in the NCC cadets’ training. The nation is also taking many steps to connect our education system with NCC. Under the self-financing scheme, one lakh cadets have been raised in the colleges of the country. A similar effort is now underway in schools for one lakh cadets.

Under the new National Education Policy, 90 universities have also started NCC as an elective subject. I can see a large number of girl cadets here today. It is a symbol of the changing frame of mind. The country needs your special contribution today. There are immense opportunities for you in the country today. Now the daughters of the country are getting enrolled in Sainik Schools. Women are getting huge responsibilities in the army. The daughters of the country are flying fighter planes in the Air Force. Therefore, we should make efforts to involve more and more daughters in NCC. The daughters who joined NCC themselves can become an inspiration in this regard.

These lines describe the culmination of power. May the power be such that it can spread the land, cover the sky and can toss the universe on the palm! The strength should be such that even the toughest situations can be faced with a smile and courage. Today Maa Bharti is giving this call to the youth of India.

The next 25 years of ‘Amrit Kaal’ (virtuous period) is the tide of patriotism. And the challenge today is not whether anyone in the world will acknowledge it or not. What is relevant today is that India should not be weak in its efforts when the world is looking at it with so much hope and confidence!

Today a huge responsibility lies on the youth of our country to provide energy to the resolutions and campaigns undertaken by India in the Amrit Mahotsav of Independence. Most of the young men and women in NCC and NSS today are born in this century itself. You have to take India with great pride till 2047. Therefore, the fulfillment of your efforts and resolutions will be India’s accomplishment and success. There is no greater devotion than patriotism and there is no greater interest than national interest. Whatever you accomplish while keeping the country paramount will help in the development of the country. Today, our youth have made India one of the top three start-ups in the world. The number of unicorns during this Corona crisis is a show of strength of the youth of India. Can you imagine more than 50 unicorns have come into existence during the Corona period? And you must be aware that the capital of each unicorn and start-up is more than 7,500 crore rupees. This ability and potential instill great confidence. And do you know, what’s the important thing about it? These start-ups fulfill one or the other requirements of the country. Someone is innovating in agriculture; someone is involved in improving the supply chain, whereas someone is doing something new to bring about changes in the education sector. They have the passion to do something for the country.

No power in the world can stop the country whose youths start moving ahead with the idea of the nation first. India’s success in the field of sports today is also a great example of this. The talent, determination and hard work of the player have their own importance, but now 130 crore countrymen are involved in his defeat and victory. The entire country unites behind the youth of India when he is taking on somebody in any field. There is also a strong feeling among the players that they are playing for the country and not for the award. The youth, the future generation of the country, has to move forward with this spirit in every field.

This period of Corona has acquainted the entire world with the discipline and social power of Indians. The world was stunned when the entire country united during the ‘Janata Curfew’ to fight against Corona. Some people curse our society, but the same society demonstrated that nothing is more important when it comes to the country. This is an example that our country can do so much if it gets the right direction and lessons.

The youths of NCC and NSS have also won the hearts of everyone with their service in this Corona crisis. Now you also have the responsibility to ensure that your training in NCC is not only restricted to when you are in the uniform. It should be part and parcel of your life and reflect from time to time. You should reckon how you will benefit society as a cadet. For example, if you live in a village, you can find out whether any student has dropped out of school. You can carry forward the spirit of NCC if you meet him and understand his problem and make efforts to help him resume his studies.

You can also form different teams in your localities in villages, towns and cities to promote cleanliness campaign, because you have to apply the leadership qualities which you learned here in the society. Your ‘Puneet Sagar Abhiyan’ for cleaning the beaches, which earned a lot of praise, should continue even after your tenure with NCC. Similarly, a mass movement ‘Catch the Rain’ is underway in the country. You can create awareness among people about how to save rainwater and keep our ponds and lakes clean.

During the freedom struggle, Mahatma Gandhi had associated the common man of the country with such tendencies, which also provided livelihood to the people, and at the same time, the patriotism movement also gained momentum. Like someone used to spin yarns, or somebody was involved in adult education, cow rearing, or in sanitation. Gandhiji linked all these issues to the freedom movement. Similarly, we have to link our aptitude and actions with the development, expectations and aspirations of the country for the next 25 years during this virtuous period of independence. Today the country is moving ahead with the resolution of ‘AatmaNirbhar Bharat’. All the youth can play an important role in the ‘Vocal for Local’ campaign.

This is the time for technology and innovation. This is the period of digital revolution. If there is any hero of this era, it is you all my young companions. Therefore, in this era of change, you have many new responsibilities as a cadet. You have to lead the country to make India a leader in this revolution and at the same time face the resultant challenges. Today, on the one hand, there are many possibilities in digital technology and information; on the other hand, there are dangers of misinformation. It is also necessary to ensure that the common man of our country does not fall prey to any rumour. NCC cadets can run an awareness campaign in this regard. Another challenge that is facing today’s youth is the deteriorating harmony between virtual and real-life! The NCC can devise training methods for this cohesion for its cadets, which can be helpful to others as well.

I want to raise another issue before you. It is regarding drugs and intoxication. You all are aware of the damages caused to our young generation due to drug addiction. Then how can drugs reach the schools and colleges where there is NCC and NSS. As a cadet, you yourself should stay away from drugs and at the same time keep your campus free from drugs. Help your friends, who are not in NCC-NSS, to quit this bad habit.

A few years back, a portal was also launched to give new energy to such collective efforts of the country. This is the Self4Society portal. Different people, companies and organizations are part of this portal and they cooperate in the field of social service. Especially, IT and tech companies of India have done a great job in this direction. Today more than 7,000 organizations and 2.25 lakh people are associated with it doing social service. Lakhs of the youth of NCC-NSS must also join this portal.

We have to expand the NCC cadets as well as take forward the cadet spirit. It is the responsibility of all of us that this spirit reaches the masses and the villages. And I believe the NCC alumni have a huge role to play in this regard. The NCC Alumni Association will play the role of a bridge and a network in this initiative. Since I am myself a member of this association, I appeal to all the alumni colleagues spread across the country and abroad to be an active part of this mission. Because, once a cadet is always a cadet! Wherever we are placed, in whatever field we are serving, our experiences can be of great use to the country and the new generation. Our experiences can be useful in making NCC better than ever as an organization. This will spread the NCC spirit and the sense of duty in society as well.

I am sure that our efforts in the Amrit Mahotsav of Independence will become the energy of building a new India, and NCC cadets will play an important role in this. With this belief, thank you all so much!

Virtual Meeting between PM and H.E. Samdech Akka Moha Sena Padei Techo Hun Sen, Prime Minister of Cambodia 18 May, 2022
PM to address ‘Yuva Shivir’ organised by Shree Swaminarayan Temple on 19th May 18 May, 2022
PM condoles the loss of lives due to wall collapse in Morbi 18 May, 2022
Cabinet approves Amendments to the National Policy on Biofuels -2018 18 May, 2022
Cabinet empowers the Board of Directors of the Holding / Parent Public Sector Enterprises to recommend and undertake the process for Disinvestment / closure of their subsidiaries / units / stake in JVs and additional delegation of powers to Alternative Mechanism 18 May, 2022