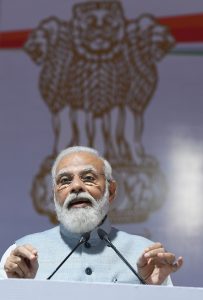 Present with us in the program Comptroller and Auditor General of the country, Shri G.C. Murmu ji, Deputy CAG Ms. Parveen Mehta ji, all the members committed to the service of the nation through this important institution and ladies and gentlemen. My best wishes to all of you on the Audit Day.

The CAG, as an institution, not only checks the accounts of the country, but also does ‘value addition’ in productivity and efficiency. Therefore, Audit Day and its associated events and brainstorming on this occasion is an important part of our improvement and improvisation. I congratulate all of you for your loyalty, for constantly reshaping the relevance and dignity of the CAG.

There are very few institutions which become stronger, mature and more useful with the passage of time. Otherwise, most institutions lose their relevance within three to five decades after their formation due to changing situations. But with respect to CAG, we can say that this institute is a huge legacy in itself even after so many years.I think it is a huge responsibility for every generation to preserve, groom, enrich and make it more congruous and stimulating for the future generations.

The last time I came here and met you, we were celebrating the 150th birth anniversary of Mahatma Gandhi. Bapu’s statue was unveiled at that event. And today when this important event of Audit Day is being held, the country is celebrating the Amrit Mahotsav on 75 years of its independence. Today we have been privileged to unveil the statue of Sardar Patel, the hero of the country’s integrity. Be it Gandhiji, Sardar Patel or Babasaheb Ambedkar, the contribution of all of them in nation building is a great inspiration for the CAG, for all of us, for the countrymen. These great personalities teach us a lot about how to set big goals for the country, achieve them and bring about changes in the systems.

There was a time when audits in the country were looked upon with apprehension. ‘CAG Vs Government’, had become the familiar perception of our system. People thought Babus are like this only and the Babusfelt that the people of CAG are such that they find only fault in everything. Everyone had their own point of view. Now this mindset has been changed. Today audit is considered as an important part of value addition.

The CAG has the advantage of an outsider viewpoint while assessing the performance of the government. Whatever you suggest to us, we make systemic improvements and we see it as a support for ourselves.

I have had the privilege of leading governments for a long time. I used to tell my officers when I was the Chief Minister of Gujarat, and I continue to say even today that you must give all the documents and data that are asked by the CAG. Give them other files related to your work as well. This creates scope for us to do better work. Our self-assessment work becomes easy.

Honesty and transparency, be it in our personal life or in government, are the biggest morale boosters for us. For example, earlier inconsistent practices were followed due to lack of transparency in the banking sector of the country. As a result, the NPAs of the banks kept increasing. You know better than me how the NPAs were brushed under the carpet in the past. But we put the truth of the previous governments and the factual position before the country with complete honesty. If we recognize the problems, then only we will be able to find solutions.

Similarly, there were constant warnings from your side regarding the fiscal deficit and government spending. We accepted your concerns in a positive way and took bold decisions to monetize unused and under-used elements. It is the results of these decisions that the economy is gaining momentum again and is being discussed all over the world and being welcomed. When CAG will do a comprehensive assessment, I think there will be many aspects of these decisions which are sometimes missed out even by the experts.

Today we are developing such a system in which the old thinking, ‘सरकारसर्वम्, सरकारजानम, सरकारग्रहणम’ is being changed. As a result, the interference of the government is also dwindling and your work is also getting easier. As part of the ‘Minimum Government, Maximum Governance’,reforms like contactless customs, automatic renewals, faceless assessments and online applications for service delivery have ended unnecessary government interference.

When there is transparency in the system, the results are also clearly visible to us. Today India has become the third largest start-up ecosystem in the world. Today there are more than 50 Indian unicorns. Our IITs have emerged as the fourth largest creator of unicorns. All of you, every organization of the country has to be a participant, take ownership and walk as a co-traveler in this campaign of ‘Minimum Government, Maximum Governance’. This resolve for each of our constitutional institutions in this virtuous period will be a useful force to take the country to great heights when India will celebrate the centenary of its independence in 2047.

For decades, the identity of the CAG in our country has been as the intrusive custodian of government files and books. This was the image of the people associated with CAG. I had mentioned this in 2019 also when I came amongst you. I am glad that you are bringing out changes rapidly and modernizing the processes. Today you are using advanced analytics tools, geo-spatial data and satellite imagery. These innovations should also be in our resources as well as in our working style.

I am told that you have already started sharing the preliminary findings with the departments before the field audit. This is a healthy practice. The results will be better when you combine these preliminary findings with your field study. Similarly, I had suggested you to go out of the office and meet the auditees and stakeholders. You have accepted this suggestion. In February last year, senior officers of the CAG and secretaries of ministries also held a seminar. I appreciate these efforts and hope that this cycle will not stop with the seminars.

This will become a vehicle for progress in partnership between the CAG and the departments. When I hear that you have included a woman head of a Gram Panchayat in this process, then it is a matter of pride for all of us that today our institutions are working in such an open environment at ground level. This evolution and experience will take CAG as well as our auditing mechanism to a new height. The more strong and scientific our auditing is the more transparent and strong our systems will be.

I have been getting information about how diligently the CAG worked even in the difficult times of Corona and just got to hear about those things from Murmu ji. The wave of corona reached here through other major countries of the world, there was a challenge of such a large population in front of us, the pressure of limited resources was on our health workers, but the country worked on a war footing on every front from treatment to rescue. If developed countries had vast resources, we had incomparable social power.

I am told that the CAG has also gone beyond its obligations to help the general public in vaccination. Every institution of the country, every countryman was busy in performing his duty with this spirit. We didn’t see what our job was? We sensed what we could do! As challenging as this biggest pandemic of the century was, the country’s fight against it has also been extraordinary.

Today we are also running the world’s largest vaccination program. Just a few weeks back, the country crossed the 100 crore vaccine dose milestone. I would also like the CAG to study the good practices developed during the country’s fight against the pandemic along with its routine work. The systematic learning, new things that the country learned and adopted will also help in becoming global good practices in future and will prepare the world to fight against future pandemics resolutely.

In the olden times, information was transmitted through stories. History was written through stories. But today in the 21st century, data is information, and in the coming times our history will also be seen and understood through data. In the future, data will dictate the history! And, when it comes to data and its assessment, there is no better master than you. Therefore, the efforts that the country is making in the Amrit Mahotsav of freedom today, the goals for which it is moving forward and when these efforts and this period will be assessed in future, then your work, your documents will become an authentic basis for it. As we look at the history related to our freedom struggle today and draw inspiration from it, similarly when the country completes hundred years of independence, then your present study reports can become an important tool for India to look into its history and learn from it.

Today, the country is doing so many things which are unexpected and unprecedented in itself. Just now when I was mentioning the world’s biggest vaccination campaign as an example to you, similarly, you can see the efforts of the countrymen engaged in many resolutions. Till a few years ago, we used to keep a financial statement of the government accounts worth lakhs and crores of rupees, but the truth was also that crores of citizens of the country did not even have their own bank accounts. There were so many families who did not have their own house to live in, did not have a concrete roof over their heads. Basic necessities like drinking water facility, electricity connection, toilets at home, treatment facilities to the poorest of the poor used to be luxury for crores of people in our own country. But today this situation has changed, and is also changing rapidly. If the country has reached this point, then the hard work of so many countrymen is behind it. All of them, be it people in our health sector, banking sector, government departments and administration, or our private sector, have worked at an extraordinary level with an unprecedented harmony. It is only then that the delivery of the rights of the poor to their doorstep has become possible, only then the development of the country has gained this momentum.

The impact of these decisions in society is so comprehensive that we can understand them only when focused studies are done in this direction! The CAG should also assess these efforts and results of the country. This account will be a manifestation of the collective efforts of the country, a living document of the country’s potential and its confidence. At the same time, your documents will also come in handy in finding better ways of functioning for the governments to come.

I am sure that your contribution to the country will continue unabated and will give new impetus to the development of the country.

With this conviction, thank you all so much! And many best wishes to you all.

In future, data will be dictating the history: PM