PM’s address at the launch of Atal Jal Yojna 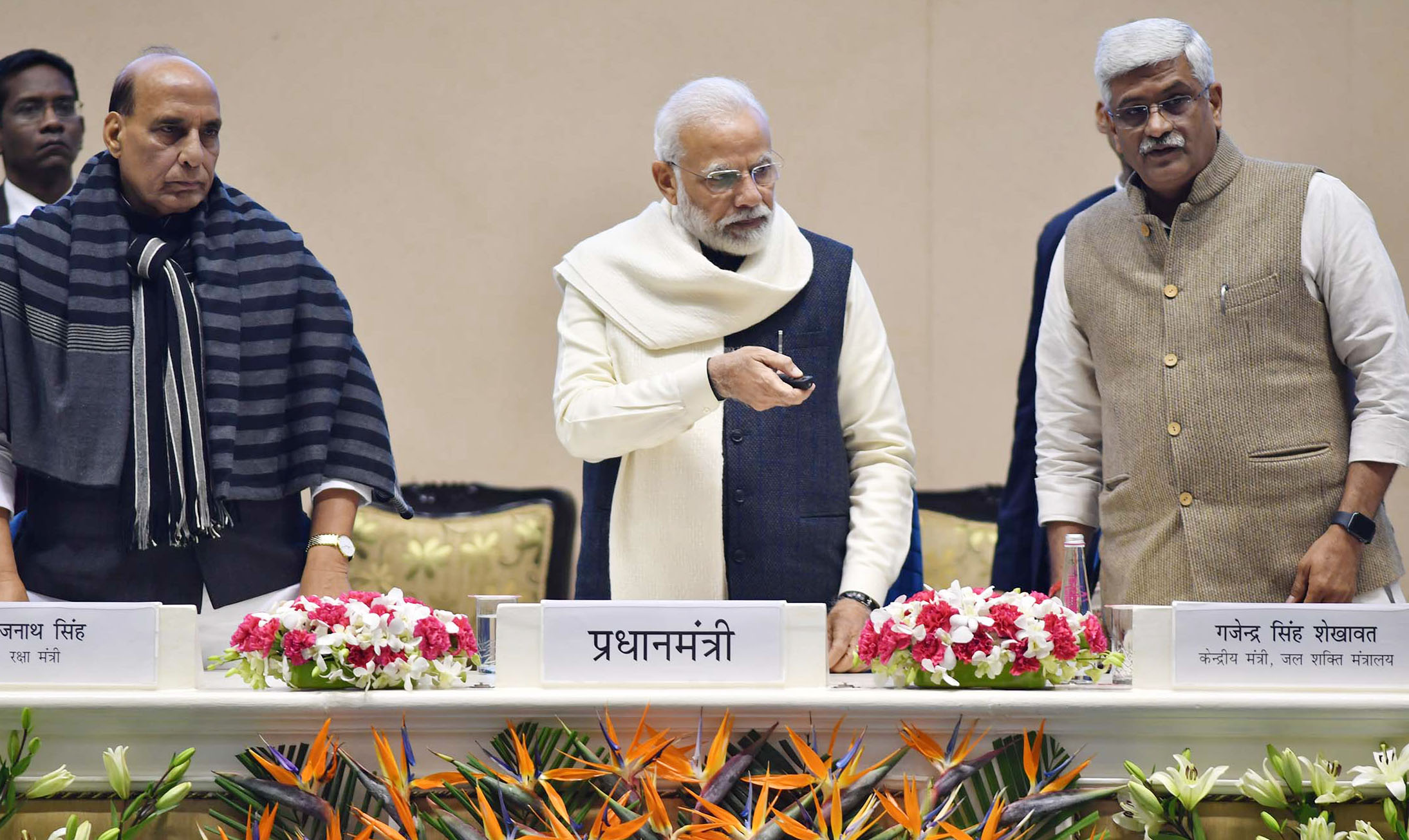 Thousands of people from many common service centers across the country, especially the Panch-Sarpanchs of the villages are also connected with us at this time.

Some people from Atalji’s beloved village are also connected.

Greetings to all! I welcome all of you.

Today, on this platform, first of all, I wish the people of the country and the world, a very happy Christmas.

I bow to them, pay tribute to them on behalf of the country.

I have been told that there has been a Havan ceremony in the memory of Atal ji in Prini today. Some other programmes have also taken place.

Today a major project that is very important for the country has been dedicated to Atal ji.

Rohtang Tunnel, connecting Himachal Pradesh with Ladakh and Jammu Kashmir, as well as Manali with Leh, will now be known as Atal Tunnel.

This is a small gift from the government to the people of Himachal and Prini on Atal ji’s birth anniversary.

It was Atalji who understood the importance of this tunnel and paved the way for its construction.

Naming this tunnel after Atal ji is also a symbol of his love for Himachal and your respect and immense love for him.

The subject of water was very important to Atal ji and very close to his heart.

His vision for water inspires us even today.

Whether it is the Atal Jal Yojana or the guidelines related to the Jal Jeevan Mission, these are the major steps in proving the resolve to deliver water to every household in the country by 2024.

It is this water that affects everything – household, farm and industry.

And the status of our water sources is not hidden from anyone.

This water crisis is worrisome for us not only as a family and a citizen but also as a country as it affects development too.

We have to prepare New India to deal with every situation arising out of water crisis.

For this, we are working together on five levels.

First, we broke the silo mentality of the departments related to water.

Secondly, in a diverse country like India, we emphasized on the formulation of schemes in view of the ground situation of every region.

Thirdly, attention is given to the correct storage and distribution of the water available.

Fourth – prioritizing schemes related to the use of every drop of water and recycling of water.

Fifth and most important is the awareness and public participation.

Before the election, when we talked of a Jalshakti ministry dedicated to water, some people thought what kind of a promise was that.

But very few noticed the reason for its need.

Over the years, we have had several issues related to water, be it the resources, conservation, management –  all the operations and work were being handled  in different departments and ministries.

This, in a way, is the best example of the silos that I often talk about.

Because of this, there were frequent disputes and problems between different departments and ministries of the central government, and sometimes between the central and the state governments.

Its disadvantage was that the basic requirement like water, for which a Holistic Approach should have been followed, could not be followed during the regime of the previous governments.

The Ministry of Jalshakti pulled the issue of water out of this Compartmentalized Approach and stressed upon the Comprehensive Approach.

In this monsoon, we have seen how extensive efforts have been made for water conservation by the society, and the Ministry of Jalshakti.

The regional diversity that I talk about is very important for water related schemes.

Here, it is said that water changes at every mile.

Now the country which is so diverse, so wide, considering a subject like water here, we have to move forward keeping in mind the needs of every region.

This thinking has laid the foundation stone of the Atal Jal Yojana.

This scheme will go a long way in raising the ground water level in the seven states of Maharashtra, Haryana, Karnataka, Rajasthan, UP, MP and Gujarat.

In 78 districts of these seven states, groundwater level in more than 8,300 Gram Panchayats is in a critical state.

The people who are now connected with us live today know very well how they have to bear the brunt of the same.

The problems of the farmers, cattle herders, small entrepreneurs, and women of these areas, are not hidden from anyone.

For the people to get rid of these problems and to improve the water levels, we have to conduct awareness campaigns, and Artificial Intelligence, Internet of Things and necessary data have to be added.

And most importantly, we need to emphasize on water conservation and promotion so that every drop of water is used judiciously.

How will this happen?

Who will lead this team?

For this, we have to go to those people, and involve them who use water, who are affected by water crisis.

For this, we have to go to our mothers and sisters who are the real heads of the households. The water in the houses should be used as per the need. Water should be recycled as far as possible. This discipline has to be brought within the houses.

For this, we also have to go to the farmers.

Our farming is heavily dependent on irrigation from ground water.

But it is also true that our old methods of irrigation waste a lot of water.

Besides this, there are several crops like sugarcane and paddy that require too much of water.

It has been often seen that the ground water level in the areas where these types of crops are grown is decreasing rapidly.

To change this situation, we have to make farmers aware of rainwater harvesting, alternative crops and we should move more and more towards micro-irrigation. We have to promote Per Drop More Crop.

When we spend something for the house, we also look at our income and bank balance, and prepare our budget. Similarly, where the water is scarce, we have to encourage the people of the village to make a water budget and to grow crops on that basis.

And I want to tell those who have come here from the villages and those who are connected with us live, that you have the greatest responsibility in the Atal Jal Yojana.

There is a provision under the Atal Jal Yojana according to which the gram panchayats that does the best work related to water will be given more funds so that they can do more of the good work.

My sarpanch brothers and sisters,

Your hard work and participation are very important to make water available to every household in the country.

It is very important for you to know.

It is also important for every citizen of the country to know.

Even after so many years of independence, water reaches only 3 crore houses of the country through pipe today.

Out of 18 crore rural households, only 3 crore households!

This was achieved in 70 years.

Now, in the next five years, we have to provide clean drinking water to 15 crore homes through pipes.

The central and state governments are going to spend more than Rs.3.5 lakh crore in the next five years for the same.

Certainly this resolution is very big, but we have no choice but to succeed. We have to succeed.

In such a situation, it is very important to show our commitment on the ground. It should be visible in every village.

The guidelines of the Jal Jeevan Mission, which have been released today, are going to help us in our endeavour.

The Jal Jeevan Mission is not just about providing clean water to every household.

This mission also ensures that our mothers and sisters do not have to fetch water from great distances, they live with honour and dignity, and their lives are easier.

Even today when I see an elderly mother wandering for water, when I see a sister walking for miles with a pitcher on her head, many memories of childhood come back to me.

The time has come to liberate crores of such sisters across the country from the trouble of searching for water.

Since we have taken the resolution, we will accomplish the same and prove it.

There is also a glimpse of Gandhiji’s ‘Gram Swaraj’ in this scheme of village participation and partnership.

Water-related schemes should be formulated according to the situation at every village level. This has been taken care of while preparing the guidelines of the Jal Jeevan Mission.

And therefore, we have to connect the villages with pipelines right from its planning to its management.

We always have to remember that my brothers and sisters in the villages and the elders have a wealth of knowledge regarding water storage and the sources of water.

Who else will be a greater expert than the people of the villages?

Therefore, we have to make full use of the experience of the people of the villages.

Our government’s effort is to empower more and more people in the Jal Jeevan Mission, and to make them self-reliant.

For this mission, a special committee will be formed in every village, and action plans will be made at the village level itself. I would urge that at least 50 per cent of the village’s sisters and daughters should be in this committee.

Moreover, to check whether clean water is being supplied or not, the residents of the village, sons and daughters of the village will be trained in the same.

Similarly, through skill development scheme, youths of villages on a large scale will be imparted training for becoming fitters, plumbers, electricians, mechanics etc.

Yes it is true that in some inaccessible areas, in some remote hilly areas, due to weather and geographical conditions, it will be difficult to lay the pipelines.

Will we leave such places?

Alternative arrangements will be made for such places.

It will also be ensured that the people of those villages get pure and clean water.

One more thing is being done under the Jal Jeevan Mission. For the monitoring of this scheme, both the technology and artificial intelligence are being used.

In every village, how much water is being stored, how much is being spent, all the information about the status of water will be constantly monitored.

Under the Jal Jeevan Mission, the government has also made a provision that on the successful completion of the scheme in your village, the government will send money directly to the account of the water committee so that the people of the village can maintain and manage the water related systems.

I have another request that the people of every village prepare a water action plan and create a water fund. In your village, funds come for several water related schemes. It comes from the fund of MLAs and MPs, and from the schemes of the Central and the state governments.

We have to make an arrangement wherein all the money comes at one place and is spent from one consolidated fund. This will allow more money to be spent at once instead of spending money in parts.

On this occasion, I will also urge the Indians settled around the world to contribute to this sacred campaign.

I also appeal to my brothers and sisters living in the villages today, to come forward to conserve water, manage water distribution and recycling of water.

You give your time and put your labour. If you walk one step, the government will walk nine steps.

Let us, together, step by step, fulfil our obligation to provide the common people of the country with the right to clean water.

Your efforts and success are very important for the country’s water security and food security.

Once again my best wishes to the entire country for Atal Jal Yojana and Jal Jeevan Mission.