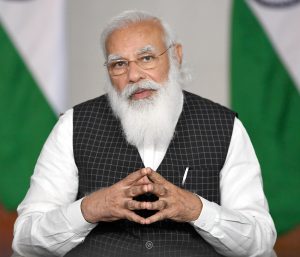 Thank you very much for raising many important points. The country has been fightingagainst corona for more than a year. The way the people of India have confronted the corona is being discussed as an example in the world. Today, more than 96 per cent of the cases in India have recovered. India is in the list of countries in the world where the fatality rate is the lowest.

Several important aspects have emerged from the presentation made on the situation of corona in the country and the world. Most of the corona-affected countries in the world have suffered many waves of the corona. In our country also, there has been a sudden increase in cases in some states after the decline. All of you are paying attention to these, but there still are some states like Maharashtra, Punjab and all the chief ministers are concerned about the situation. It is not so that only I am saying. You, too, are concerned and it is rightly so. We have also noticed that the positivity rate in Maharashtra and MP is very high and there is a rise in the number of casesalso.

This time, the cases are rising in many areas and districts, which were unaffected so far. In a way, they were safe zones, but now fresh cases are emerging. This increase is more than 150 per cent in 70 districts of the country in the last few weeks. If we don’t stop the pandemic in its tracks, the situation can lead to a country-wide outbreak.We must immediately stop this emerging “second peak” of the corona. We will have to take quick and decisive steps. At many places, it has been noticed that the local administration is also not showing seriousness on the issue of masks. I think it is necessary now that the difficulties in governance at the local level should be looked into, reviewed and resolved.

It is a matter of concern as to why the testing is going down in some places? Why is vaccination also slowing down in those places? I think it is also the time for the test of good governance. In our battle against Corona, our confidence should not become over-confidence and our success should not turn into negligence. We don’t have to lead the people into panic mode also. We don’t want a situation where panic reigns and we also have to relieve the people of distress by taking some precautions and initiatives.

We have to formulate strategies by incorporating our old experiences in our fresh efforts. Every state has its own experiments, good initiatives and many states are also learning those from other states. Over the past one year, our government machinery is trained now how to work in such circumstances at the bottom level. Now we need to be pro-active. I urge you that there should not be any slackness regarding the option of micro containment zones under any circumstances. If need be, the pandemic response teams working in districts should be reoriented regarding “containment and surveillance SOPs”. Once again, there should be lengthy discussion at every level. We can give an impetus to the exercise by sensitizing and revisiting old methods. At the same time, we need to be equally serious on ‘test, track and treat’ as being done for the last one year. It is very important to track the contacts of every infected person in the shortest possible time and keep the RT-PCR test rate above 70 per cent.

We have also noticed that many states like Kerala, Odisha, Chhattisgarh and UP are overemphasizing on rapid antigen testing. I think it needs to be changed immediately. Not only these states, I want that all the states of the country should insist on maximum use of RT-PCR tests. One point which needs to be noted is that the areas around our Tier-2 and Tier-3 cities, which were not affected initially, are reporting many cases. See, one of the reasons why we survived this battle was because we were able to keep the villages away from it. But if it reaches Tier-2 and Tier-3 cities, then it will not be too late before it reaches villages and in that case, our resources will be inadequate to take care of the villages.Therefore, we have to increase testing in smaller cities.

We have to pay special attention to the “referral system” and “ambulance network” in smaller cities. The presentation also reveals that the spread of the virus is now happening in a dispersed manner. The major reason for this is that now the entire country has been opened up for travel and the number of people coming from abroad has also increased. Therefore, it has become necessary for all the states to share the travel history of every person and his contacts. If a new mechanism is needed to share information then it should also be considered. Similarly, the responsibility for SOP’s adherence for the surveillance of travellersfrom abroad and their contacts has also increased. We also need to identify the mutants of the coronavirus and assess their effects. It is equally important to send genome samples for testing so as to detect the variant of the virus in your states.

Whatever shortcomings of planning and governance at the local level, they should be rectified immediately. We should do everything to prevent this vaccine wastage and I would like states to start working with the target of zero wastage. Once we try, there will definitely be improvement and our efforts to provide both doses of vaccine to as many health workers, frontline workers and other eligible people will be successful. I am confident that the impact of these collective efforts and strategies will soon be visible to us and there will be positive results as well.

Finally, I want to repeat a few points so that we all move about focusing on these points. A mantra that we must constantly tell everyone: “Medicinesas well as strict adherence also”. See, medicine does not mean the disease has disappeared. Suppose someone has a cold and he takes medicine. It does not mean that he should go to a colder place without wearing woolen clothes or without any protection, or get himself drenched in rain. Well, you have taken medicine, but you will also have to handle the rest. This is the law of health, and it is not only for this disease, it applies to every disease. If we are diagnosed with typhoid, we take medicines but the doctor still prohibits us from eating some items. It is like that. Therefore, I think, people should be explained regarding these common things. And we should repeatedly urge the people to follow the rule of “medicines as well as strict adherence”.

Secondly, as I said earlier, it is very important to scale up RT-PCR tests, so that new cases are identified immediately. We should urge the local administration to work towards creating micro-containment zones. They should speed up this work then we will be able to prevent its spread quickly and it will also help prevent the infection from spreading. As you have seen the state-wise map, there is a need to increase the number of vaccination centres both at the private or government level.  The green dots point out that there are either not sufficient vaccination centres or they are not active in many areas. You see, technology is helping us a lot. We can organize many day-to-day things very easily. We have to take advantage of it, but on the basis of that, we also have to make improvement. If our centres are more pro-active and work on mission mode, there will be reduction in wastage of doses and the people visiting these centres will also increase. A new trust will grow immediately. I want that it should be given more emphasis.

At the same time, one thing we have to keep in mind is that we have to complete the vaccination process as soon as we can as there is continuous production of vaccines, otherwise, it will drag on for one-two-three years. Another important issue is the expiry date of the vaccines. Therefore, we have to use the doses which arrived first and accordingly. If we make the first use of the vaccines which arrived lately then we will be confronted with the expiry as well as the wastage of the doses.Therefore, I think we should prevent avoidable wastage. We should be aware of the expiry date of the lot of the doses and use it first. This is very necessary. Along with these, we will have to keep other fundamental steps in mind to prevent the spread of this infection which I say repeatedly – “medicines as well as strict adherence”, use of masks, distance of two yards, special attention on cleanliness, personal hygiene and social hygiene. We need to emphasise several steps that we have been taking for the last one year. We should insist on these steps and if needed there should be strict adherence. As our Captain (Amarinder Singh) Saheb was saying that his government is going to run a very strict campaign from tomorrow, it is a good thing. I think we all have to deal with it firmly.

I am confident that we will succeed in maintaining people’s awareness on these subjects. I once again thank you for your suggestions. Please send me if you have more suggestions. You share all the information within two or four hours regarding the issue of the hospital which has come up today so that I will take any necessary decision required to remove any of the bottlenecks by reviewing it with the people of my department and the Health Ministry around 7-8 o’clock in the evening. I reiterate that the battle that we have won so far is because of our cooperation, the cooperation of our corona warriors and the people have also cooperated very much. We have not had to struggle with the people. Whatever we said, the people believed and followed and India is winningbecause of the awareness and cooperation of the 130 crore countrymen. If we can re-connect with the masses on the issue and inform them again, I am sure we will be able to prevent this resurgence and bring the figure down. All of you have worked very hard andnow you have a team of experts. Start asking a little daily once or twice, start holding meetings once or twice in the week, things will automatically pick up the pace.

I thank you all as I called all of you at a very short notice and all of you took time out and gave detailed presentations.