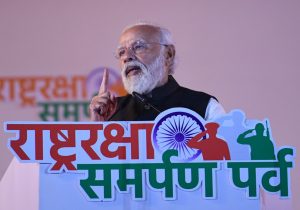 “On the one hand, the strength of our forces is increasing, at the same time, the ground is also being prepared for the capable youth to protect the country in future”

“For a long time, India has been among the largest arms buyer countries in the world. But today the mantra of the country is – Make in India, Make for the world”

The Prime Minister also laid the foundation stone of the 600 MW Ultramega Solar Power Park at Garautha in Jhansi. It is being constructed at a cost of over Rs 3000 crore, and will help provide the dual benefits of cheaper electricity and grid stability. The Prime Minister also inaugurated Atal Ekta Park in Jhansi. Named after Former Prime Minister Shri Atal Bihari Vajpayee, the park has been built at a cost of over Rs 11 crore, and is spread across an area of about 40,000 square metre. It will also house a library, as well as a statue of Shri Atal Bihari Vajpayee. The statue has been built by the renowned sculptor Shri Ram Sutar, the man behind the Statue of Unity.

Addressing the gathering, the Prime Minister noted the birth anniversary of Rani Laxmibai, the pinnacle of valor and might and said today this land of Jhansi is witnessing the grand Amrit Mahotsav of freedom! And today a new strong and powerful India is taking shape on this land. Prime Minister said he feels pride in representing the birthplace of Rani Laxmibai i.e. Kashi. The Prime Minister also extended warm wishes for the Prakash Purab of Guru Nanak Dev Ji, Kartik Purnima and Dev-Deepawali. The Prime Minister paid tribute to many heroes and heroins for their contribution to the history of valor and sacrifice. “This land has also been a witness to the bravery and military prowess of Veerangana Jhalkari Bai, who was an inseparable ally of Rani Laxmibai. I also bow at the feet of that immortal heroine of the freedom struggle of 1857. I bow to the Chandelas-Bundelas, who wrote immortal tales of Indian valor and culture from this land, who made India proud! I bow to the pride of Bundelkhand, those brave Alha-Udals, who are still a symbol of sacrifice and sacrifice for the protection of mother-land” the Prime Minister narrated.

The Prime Minister also remembered Major Dhyan Chand, son of Jhansi and talked about the renaming of the highest award in sports excellence after the Hockey legend.

The Prime Minister, who was registered as the first member of NCC Alumni Association, called upon the fellow alumni to come forward in service to the nation and contribute in whatever manner possible.

With the historical Jhansi fort behind him, the Prime Minister said that India never lost any battle due to lack of valor. If Rani Laxmibai had resources and modern weapons at par with the British, then the history of the country’s independence might have been different, he said. The Prime Minister said for a long time, India has been among the largest arms buyer countries in the world. But today the mantra of the country is – Make in India, Make for the world. Today India is working to make its forces self-reliant. Jhansi will be a major player in this enterprise, he added.

The Prime minister said events like ‘Rashtra Raksha Samparpan Parv’ will go a long way in creating an environment of Aatmnirbharta in the defence sector. He said we need to celebrate our national heroes and heroines in the similarly grand manner.

Happy to be in Jhansi on the Jayanti of Rani Lakshmibai. Watch my speech. https://t.co/9CBKlSjvvF