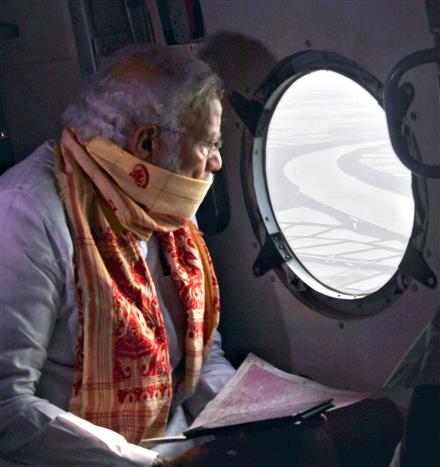 Prime Minister Shri Narendra Modi today visited Odisha to take stock of the situation in the wake of Cyclone Amphan. He was accompanied on the visit by Union Minister Shri Dharmendra Pradhan, Union Ministers of State Shri Babul Supriyo, Shri Pratap Chandra Sarangi and Ms. Debasree Chaudhuri. Accompanied by the Governor of Odisha,Shri Ganeshi Lal, and Chief Minister Shri Naveen Patnaik, Prime Ministerconducted an aerial survey of Bhadrak and Balasore to assess the impact of the cyclone.

After the aerial survey, Prime Minister chaired a meeting in Bhubaneshwar with the senior State and Central Government functionaries to review the situation.  He announced a financial assistance of Rs. 500 crore to the State of Odisha, pending the assessment of the damage by an Inter-Ministerial Central Team.

Prime Minister gave his assurance that the Union Government would work shoulder to shoulder with the State Governments at this difficult time and give all possible assistance for restoration and rebuilding of infrastructure in the areas affected by the cyclone.

Expressing solidarity with the people of Odisha and deep sorrow for the lives lost, Prime Minister announced an ex-gratia of Rs. 2 lakh to the next of kin of the deceased and Rs. 50,000 to the seriously injured in the cyclone in the State.

Shri @narendramodi has reached Odisha, where he was received by @GovernorOdisha Ganeshi Lal and CM @Naveen_Odisha . There will be an aerial survey and review meeting to take stock of the situation due to the cyclone in parts of the state.

Everyone is fighting COVID-19.

In such a time, we had a super cyclone in some parts of India. This became very worrying. At the same time, due to the well established processes in Odisha, many lives were saved.
I congratulate the people and Government of Odisha: PM @narendramodi

At the same time, there has been damage to property, which we reviewed in a meeting today.

All possible assistance will be provided by the Centre to ensure quick relief work.

Rs. 500 crore will be given to Odisha as advance assistance: PM @narendramodi in Odisha