PM’s address at the joint launch of Sansad TV 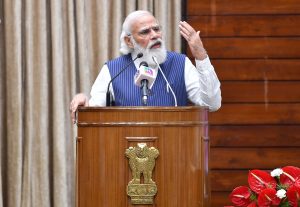 Today is another important chapter in our parliamentary system.

Today, the country is getting such a medium of communication and dialogue in the form of Sansad TV, which will serve as the new voice of the country’s democracy and people’s representatives.

I wish all the best to all of you, the entire team that has made this idea a reality. As our hon’ble Speaker informed, today also marks the completion of 62 years of Doordarshan. This is a very long journey. Many people have contributed in making this journey a success. I also congratulate all the people associated with the operation of Doordarshan.

In the rapidly changing times, the role of media and TV channels is also changing very fast. The 21st century is bringing a revolution especially through communication and dialogue. In such a situation, it becomes natural that the channels associated with our Parliament should also transform themselves according to these modern systems.

I am happy that today a new beginning is being made in the form of Sansad TV. I have also been told that Sansad TV in its new avatar will also be available on social media and OTT platforms, and will also have its own app. With this, our parliamentary dialogue will not only be connected with modern technology, but it will also increase its reach to the common man.

By the way, all of us in India are also celebrating Engineers Day today. This sacred day, on the birth anniversary of M. Visvesvaraya ji, is dedicated to the hardworking and skilled engineers of India. In the TV world, OB engineers, sound engineers, people involved in graphics designing, panelists, studio directors, cameramen, video editors and so many professionals make broadcast possible. Today I especially congratulate the engineers working in all the TV channels of the country along with Sansad TV.

Today, when the country is celebrating 75 years of its independence, we have the glory of the past and the resolutions of the future. The media has a huge role to play in both these areas. When the media raises a topic, such as Swachh Bharat Abhiyan, it spreads faster to the people. The media can do a great job by publicizing the efforts of the countrymen in the Amrit Mahotsav of freedom. For example, TV channels can plan 75 episodes of the freedom struggle and create documentaries. Newspapers can publish supplements related to Amrit Mahotsav. Digital media can directly connect youth through ideas like quizzes and competitions.

I am told that the team of Sansad TV has also planned many programs in this direction. These programs will go a long way in spreading the spirit of Amrit Mahotsav to the masses.

All of you are creative people in the communication field. You often say that “content is king”. I want to share my experience with you. My experience is “Content is Connect”. That is, when you have better content, people automatically engage with you. As much as this applies to the media, it is equally applicable to our parliamentary system. Because there is not only politics in Parliament, there is also policymaking.

When Parliament is in session, debates are held on diverse subjects, and there is so much for the youth to learn. When our honorable members also know that the country is watching them, they also get inspiration for better conduct, better debates inside the Parliament. This also increases the productivity of Parliament, and the public interest works also become popular.

Therefore, it is very important that people connect with the proceedings of the House, no matter where they are in the country they should become a part of the activities of the House. Therefore, Sansad TV will also have to design its programs keeping in view the interests of the people, especially the youth. For this, attention will have to be paid to the language; interesting and engaging packages will become mandatory.

For example, historical speeches in Parliament can be highlighted. Along with meaningful and logical debates, sometimes some funny moments can also be aired. Information about different MPs can also be shared so that the people can make a comparative analysis of their work. Many MPs are doing commendable work in different fields. If you highlight these efforts, their enthusiasm will also grow and other public representatives will also get inspiration for positive politics.

Another important topic that we can take up in Amrit Mahotsav is our constitution and civic duty! There is a need for constant awareness regarding the duties of the citizens of the country. Media is an effective medium for this awareness. I am told that Sansad TV is coming up with many such programs.

Our youth will get to learn a lot about our democratic institutions, their functioning as well as civic duties from these programs. Similarly, there will be a lot of information about working committees, importance of legislative work, and working of legislatures which will help in understanding the democracy of India in depth.

I hope that Sansad TV will also make programs on Panchayats working as grassroots democracy. These programs will give a new energy, a new consciousness to the democracy of India.

Our Parliament, different political parties, our media, our institutions, all have their different spheres of work. But a united effort is needed to fulfill the resolutions of the county.

I am sure that all of us in our different roles will move forward with shared resolutions, and fulfill the dream of a new India.

With this belief, I would also like to congratulate Ravi Kapoor because this is not his domain. But I was really impressed when he came to tell me how he consulted people from all over the world, took guidance from them, got ideas and shaped Sansad TV. I congratulate Ravi and his entire team. Many congratulations and very best wishes to all of you!

India is the mother of democracy.